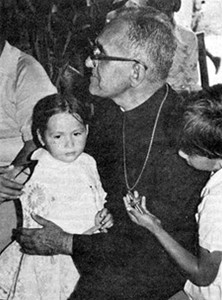 COAR, the Community of St. Oscar A. Romero, was founded in the summer of 1980 as a war orphanage at the beginning of El Salvador’s civil war (1980-1992).  It is the oldest extant organization in the world named for St. Romero.

It was founded between two murders: the martyrdom of St. Romero on March 24, 1980, and the murders of the Four North American Churchwomen on
December 2, 1980. (The Ursuline Sisters have an excellent remembrance here.)

COAR has always been owned and operated by the Roman Catholic Archdiocese of San Salvador. However, it was founded in 1980 through the actions of some of the members of the Cleveland Latin American Mission Team (the CLAM Team) at the parish site located in the small town of Zaragoza. CLAM had been ministering in El Salvador since 1964, beginning its service in San Miguel diocese at the far eastern end of the country. Beginning in 1983 Sisters of Charity of the Incarnate Word, Houston, TX (CCVI) managed the orphans and clinic; from 1991-2009 they administered all of the Children’s Village.  Since 2009 it has been directly staffed and administered by the Roman Catholic Archdiocese of San Salvador, Vicariate of Human Development-CARITAS.  Throughout these 40 years it has been supported from North America by the COAR Peace Mission, a 501c3 charity that grew out of those original supporters of the CLAM Team.

Read more about these people and events, below. 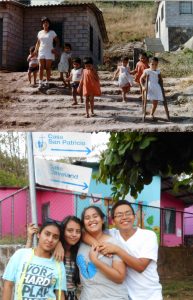 The history of COAR is written in our houses, the houses where the children live, where they learn to be a family, where they are safe. They were built (and named) as the population of orphans grew between 1981 and 1986.  The names both teach and bear witness. They teach the history of El Salvador and the Church and they bear witness to the sacrifices and courage that have given the children these homes. Please help us keep these joyful witnesses alive and in good repair for the next 40 years for those children who will need protection and love.

CASA CLEVELAND
1964 – 1977: COAR’s story begins in 1964 with the Cleveland Latin American Mission (CLAM) Team, when the Diocese of Cleveland, Ohio, sent priests, nuns, and lay volunteers to El Salvador in response to the Church’s quest to assist dioceses and support parish life in countries where there was a need for more ministers. In 1974 Fr. Ken Myers began restoring the small parish buildings in Zaragoza, located between the capital city of San Salvador and the main parish center in the Pacific port city of La Libertad. He was helped by fellow CLAM Team missionary Sr. Dorothy Kazel, OSU.  When the flood of refugees began, the parish was able to house them.

CASA CHALATENANGO
1522-1977: While COAR was founded at the beginning of the civil war in 1980, the war, and the work of the CLAM Team have their roots in the Spanish colonization that began in El Salvador in 1522. The Spanish met a thriving and large indigenous culture who lived in towns with communal plots of land where they grew corn and cotton and other crops for sustenance and trade. Over the next three centuries the Spanish, and rich landowners after independence in 1821, created ever-larger plantations of sugar cane, indigo, and coffee, pushing the indigenous peoples on to smaller and less productive plots of land. This gave rise to increasing inequality and poverty which, in turn, led to episodes of unrest throughout El Salvador’s history. By the 1970’s there were frequent disputed elections and coups over the difficult issue of land, business, and government reform. Government and opposition guerilla groups both attacked rural villages to terrorize the population. The military’s violence quickly overshadowed all other violence and led to refugees fleeing the countryside. The northern Department (an equivalent of a US state or Canadian province) of Chalatenango was especially targeted. A large population of the refugee orphans that would come to COAR came from Chalatenango, so a house was named for them, to help them feel at home.

CASA ROMERO
1977-1980: Into this dangerous situation the Vatican installed Óscar Arnulfo Romero y Galdámez as Archbishop of the capitol city of San Salvador in 1977. (In Spanish he was usually referred to as “Monseñor” instead of Archbishop.) He had a long history of scholarship and engagement with the poverty of Latin America and the Church’s response to it. However, one month after his installation he was personally confronted by the violence when his good friend, Padre Rutillio Grande, SJ, was murdered by government militia for his work empowering a rural parish. As the violence escalated Romero established a diocesan human rights office to investigate murders, torture, and other atrocities. He spoke out against the violence perpetrated by all sides in his Sunday homilies, broadcast by radio throughout the country. Romero did all these things even as he was receiving frequent death threats. He was murdered, while saying mass, on March 24, 1980. For his courage and martyrdom, he was canonized a saint of the Catholic Church on October 14, 2018.

Among Romero’s responses to the crisis he established refugee camps for those fleeing the violence of the countryside. He asked members of the CLAM Team and the Maryknoll religious order to work in the camps. He hoped that, as Americans, their presence would protect them and those they served from further violence. It is these refugees, particularly the orphaned children among them, that would become the first COAR orphans.

December 2, 1980: On December 2, 1980, Sr. Dorothy and Jean drove to the airport to pick up Srs. Ita and Maura who were returning from a Maryknoll meeting in Nicaragua. A detachment of soldiers detained them at the airport and took them captive in their own vehicle.  They drove them a to remote location where they were raped and then murdered with a shot to the head.  Their bodies were left by the side of the road. Salvadoran Church Officials were informed that the bodies of North American women had been found; and, after a frantic day of searching, members of the CLAM Team identified and recovered the bodies.

This event put the future of COAR in jeopardy as all members of the CLAM Team and Maryknoll faced death threats. But both groups stayed in the country and continued their ministries.

Fr. Ken welcomed more refugees, both orphans and families to the parish. Within months he acquired property near the parish and they began building small houses for the children. He and the community of Zaragoza found other areas for families, many of whom were single mothers with children.

1980: Read More . . .
1983 - Showing the road up to the new property, Srs. Stan, Audrey, Mary Pat and Fr. Ken
1996 - The safety continues (and self-sufficiency)
Sr. Stan with COAR children in need of medical attention
1989 - Tragedy: Sr. Stan shot in the head; massacre of Six Jesuits and t heir housekeeper and her daughter

1981-2009: Fr. Ken solicited funds to buy a near-by coffee farm and build houses for the children, a school, and a clinic and the “Children’s Village” was born. In 1983, Fr. Ken was joined by the Sisters of Charity of the Incarnate Word, Houston, TX (CCVI), pictured from l to r: Sisters Stanislaus Mackey, Audrey Walsh, and Mary Pat Driscoll.  They agreed to take on running the care of orphans and built a clinic that served the entire community.  (They also oversaw a farm run by the children, but that’s another story!)  Fr. Ken also reached out to the Cleveland community to fund COAR’s growing needs.

1985, 1989: During the war years the staff have left many memoirs, letters, and interviews telling of the solidarity formed within the community. They described the children’s traumas and the slow but sure healing they witnessed. Casa Juan Bosco is named for the patron saint of youth. But there were sorrows as well as joys. Two children died accidentally in 1985 and so two houses were named for them, Antonio and Jose, to keep their memories alive and assure the children of love and a remembrance that transcended everyday suffering. In 1989 Sr. Stan, pictured here with children at the clinic she built, was shot in the head by unknown assailants. She was life-flighted to Houston and recovered, though she remained blind in her left eye and her voice was damaged. She was only able to visit COAR once more before she died in 2004.

1980-present: To demonstrate COAR’s place within the Church and St. Romero’s faithfulness, a house was named after Pope John Paul II and after Our Lady of Guadelupe, patroness of all the Americas.
Financial support was also vital to COAR’s survival. The first large donations came from the Bishops of Germany (“Alemania” is the Spanish word for “Germany”) as well supporters from Cleveland and throughout North America. The original supporters in Cleveland established the COAR Peace Mission in 1985 as a 501(c)(3) Charitable Organization in the United States. The Incarnate Word Sisters took on the official management of COAR for the Archdiocese of San Salvador from 1991 to 2009. After their departure, COAR Peace Mission facilitated the management of the Children’s Village until it returned to direct administration by the Archdiocese of San Salvador, Vicariate of Human Development – CARITAS. Full financial support is now secured by COAR Peace Mission of Cleveland, Ohio. 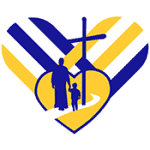