The Ursuline Sisters of Cleveland have an excellent remembrance (click here)

One of COAR Peace Mission’s treasures is a daily diary kept by Jean Donovan from January 1 – October 24, 1980, five weeks before her murder on December 2nd. With one page per day, most days have only a few sentences.  Many days are blank. All pages after October 25th are blank.  She describes finding bodies on the side of the road. She describes the army’s unexpected, and unsettling, arrival at a church or school.  She also describes the daily, simple joys of baptisms, first communions, and birthday parties. She relates funny anecdotes of daily life, annoyances like lack of water, and worries like delayed plane arrivals.  She describes Fr. Ken’s plans to open a place to care for children in the last entry listed, below.  She did not know that she was describing the beginning of COAR.

Many times she talks about Sr. Dorothy (“Dotty”), and Maryknoll Sisters Its Ford, Maura Clarke, and Carla Piette. The Maryknoll sisters were working in Chalatenango (“Chalate”).  Carla died when her jeep overturned in a flash flood on August 23, 1980 while she was taking a threatened man to safety. Because she died in service to the refugee community they were all serving, Carla is sometimes called “the Fifth” of the North American Churchwomen to die in El Salvador in 1980.

Younger generations cannot know the shock that the murders created around the world.  They confirmed St. Romero’s warnings about the source and nature of the violence.  Even today the political implications of their murders are sensitive subjects.  But what cannot be debated is the women’s courage and love for the people they served. They left us a wonderful record of their thoughts, hopes, and real fears in their letters (see our resources section for more). They knew the risk was growing.  But they stayed.

The houses named for them: Dorotea, Jean, Ita, and Maura were the first houses that Fr. Ken named.  They constantly remind the children of courage, sacrifice, and love.  They need that example and Fr. Ken, and supporters from all over the world, made sure they will always have it. 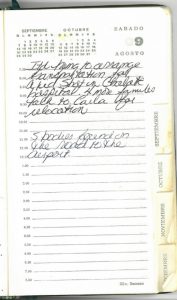 Ita trying to arrange transportation for a kid shot in Chalate [Chalatenango] hospital. 4 more families talk to Carla for relocation.

5 bodies found on the road to the airport. 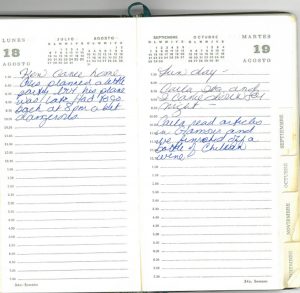 Ken came home Chris planned a little party but his plane was late. Had to go back at 8pm a bit dangerous.

Carla read articles in Glamour and we finished off a bottle of wine. 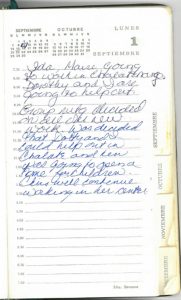